Wow Them with Your Weakness

Many leaders still believe in the never let them see you sweat mentality. And there are situations where I’d agree. But, at other times, it could be a leader’s vulnerability that starts the shift toward progress in an organization.

Wow Them with Your Weakness

Many leaders still believe in the never let them see you sweat mentality. And there are situations where I’d agree. But, at other times, it could be a leader’s vulnerability that starts the shift toward progress in an organization.

I was working with an organization that was trying to build a stronger culture of unity and teamwork. From my observations, the disconnect between leaders and employees in that organization was just big enough that major progress towards their culture goal had been stalled for years.

In order for a culture shift to happen in an organization, the heaviest responsibility falls on leaders to be the example of the new expectation.

Beth, a key leader on the team, was unmatched when it came to technical skills, but her people skills were lacking. The way she interacted with some employees — or didn’t interact at all with other employees — set the example that a unified team was nice in theory, but wasn’t something leadership actually wanted on a daily basis. Some employees said she was one to “talk the talk, but didn’t walk the walk”. What we know is that people do what people see. Hence why progress towards the organization’s culture transformation was gridlocked.

The interesting thing is that Beth knew her weakness regarding interpersonal skills. (Typically, it takes a while to get people to accurately see their own weaknesses!) Beth told me straight up that she was uncomfortable talking to people one-on-one that she didn’t know well. And because it would make her so anxious, she avoided going to certain departments in the organization or would only make time for a really quick drop by to say hello. Employees felt she was not personable and didn’t seem to really want the unified culture of teamwork they’d heard her talk about so often. This seems like such a small thing, but in leader/employee relationships, it’s the small things that mean everything.

The dynamics of the leader/employee relationship are critical in all cases, but especially when you are working to shift to a stronger teamwork culture. Beth had to do something about her interpersonal skills weakness. It was exactly the largest stone blocking the organization’s path to reaching their goal.

After careful planning, Beth agreed to admit her weakness to the entire team. Why would she do this?  Here are 3 reasons:

Be the Self-Awareness Example

We all have strengths and weaknesses. Understanding those characteristics is key to individual and team success.

As a leader, try as you might to hide it, it’s likely that everyone else already knows your weaknesses. You admitting your weakness is not news to them, but it is showing them that you’re not oblivious.

Admitting your weakness validates what they think they’ve known for a while and shows you actually are self-aware. This gives you an opportunity to set the example for your people to also recognize their weaknesses and intentionally improve their performance, too.

People are more likely to extend grace to you when they know you’re working to get better at something. Beth was uncomfortable talking with people she didn’t know. She admitted it. So, when she came around and tried to start up a conversation with someone – even if it was awkward at first – they showed her grace and simply loved that she was trying! They also struck up good working conversations with Beth because they knew that was her area of weakness. How do I know this? They told me!

Admitting your weakness may not be easy for you. It’s a humbling step to take. But when you’re humble, you earn grace from people. You earn the opportunity to show up in a way that might not be perfect, but people will give you the benefit of the doubt and reward you for trying by giving their respect, loyalty, and extending grace going forward.

As things change in your organization, mistakes will happen. To continue to make forward progress, showing grace to one another is key to creating an environment where people can try and succeed, but they can also try and fail-up.

Oftentimes leaders try to keep up with an expectation that they must be polished, pretty, and perfect. But to be honest, that doesn’t impress many people these days. People want real!

You can wow people with your weakness. Admitting your weaknesses shows that you are not perfect — no one is.  Your employees won’t think you’re weak because they no longer see you as perfect. Instead, they’ll think wow…you’re self-aware, humble, brave, an example of who they want to follow, and a leader to get behind.

Turn Over a New Leaf

Just as I expected, after that tough conversation on Beth’s part, progress really began to pick up in the organization. It’s true…humble, self-aware people who communicate well and set the example for what they expect will always be the leaders with the highest likelihood of achieving success. Maybe it’s time, maybe you have a reason strong enough to finally let them see you sweat. As a leader, it could be one of the best decisions you make.

Do you admire humble leaders? Let me know in the comments!

Want to improve your organization’s culture?

We can help! Let’s talk! 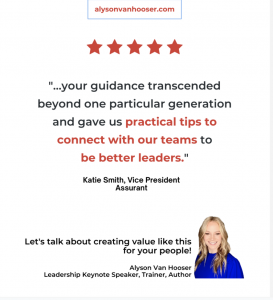 About The Author: Alyson Van Hooser

Alyson Van Hooser, Leadership Keynote Speaker, Trainer on Millennials, Gen Z & Women in Business With the grit that only comes from tough experiences, Alyson has learned a thing or two about personal and professional success. From her management experience with Walmart, as an elected city council member, bank manager — all before the age of 30 — Alyson has wisdom well beyond her years! Her podcast, Stake: The Leadership Podcast, offers a fresh perspective on leadership and helps multiple generations successfully work together! Connect with Alyson on LinkedIn and Instagram.