There is no one perfect approach to delegate tasks. However, there are some steps in the delegation process that need to be clearly identified and clearly followed for you to be successful in delegation.  Last week in conversation with Alyson Van Hooser, I covered Delegating Effectively:  What & When.  Today we are looking into the delegation conversation.

Follow these six steps to to ensure you handle the conversation to delegate tasks successfully.

2.  Clearly say what you hope the goal or end result will look like.

Hear that very carefully. We don’t want to tell them how to do the job, because then that’s just micromanagement–not delegating tasks–but we do want them to know what the end result will look like. Do you want it to be quicker, faster, cheaper, safer, higher quality, etc.? Let them understand that this is what we’re working toward. I think it was Stephen Covey, in his book The 7 Habits of Highly Effective People, who said, “Begin with the end in mind.” Well, your people won’t know what the end should be unless someone shares that with them.

3.  Tell people what the limitations of time, money, and resources are.

4.  Ask for a restatement of what they’ve just now heard.

As you are talking, he/she may start thinking, “Oh, man. I’m still thinking about number one and he’s on number three. I don’t even know what he said about number two.”  That’s a bad thing because the employee, the person you’re delegating to, is excited about the process and their mind is whirling, but you’re already to step two, step three, step four and they may have missed important information along the way.

To ask for the restatement, simply pause in the conversation and say, “Okay, [insert employee’s name], I know I have given you a lot of information. Tell me, if you will, what have you heard me say so far so I can make sure I have communicated clearly and correctly.”

What they repeat back to you may be incorrect.  Verbally take responsibility for not communicating clearly and then move forward with the correct information.

“[Employee Name], if you don’t mind, what are some of your initial ideas or your initial plans for this particular project?”  Now, frankly, don’t expect too much because you’ve just now delegated the project to them, but, even in the early stage of delegation, one’s mind is going to start whirling. I want to at least have an idea of what they are thinking.

Additionally, there’s something really important about asking for their ideas. I’m going to ask you what your ideas and plans are before I tell you what I think good plans or ideas would be. Because, if I say, “I’m interested in hearing your plans, but I think you really ought to consider “________” then they may start to think to themselves, “Well, I can’t really share my plan. I’ve got to do whatever he/she has just now told me to do. Otherwise, it’s an exercise in futility and probably frustration.”

The point being, leaders should want their employees to feel free in sharing ideas and thoughts without  hindering or hampering that flow.  The delegation conversation can be a great place for that.

When you delegate a task,  you have to create a completion date.  I’m a big one, whenever possible, for having a negotiated completion date. In other words, I’m making the assignment, I’m delegating the responsibility to you, however, I want you to be in on identifying and determining what that completion date would be. To do that,  I’ll say something like this, “[Employee name], you pretty much know what we’re looking for now, right?” Again, reference our earlier conversation. They respond, “Yes, I think we’re clear.” I reply, “I guess the only thing left to do is determine when we can get this thing wrapped up.  So here’s my question to you, when do you think you can have this task completed?”

Allow them to respond and, if necessary, negotiate the timeline as needed.  Include a midway follow up meeting where the agenda will be to discuss the progress of the project as well.  This will ensure that no one is waiting until the last minute to start the task. 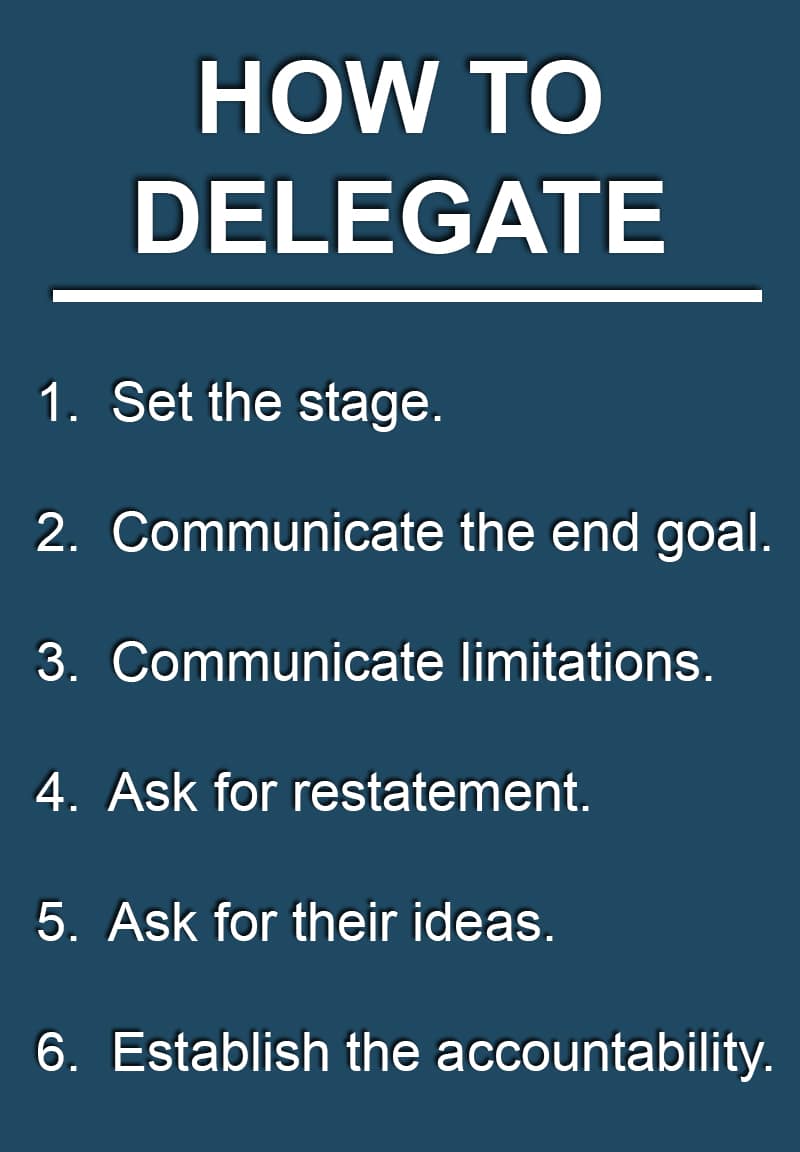 Use these 6 steps when you delegate your next task and watch the process become a truly become a collaborative effort!

Author: Phillip Van Hooser
Phillip Van Hooser, CSP, CPAE is committed to helping organizations transform their business outcomes by building engaged employee relationships. He is an award-winning keynote speaker and author on leadership, service and communication. His popular book, “Willie's Way: 6 Secrets for Wooing, Wowing and Winning Customers and Their Loyalty” recently hit #1 in Customer Relations on the Kindle store. Connect with Phil on LinkedIn and Facebook.

This site uses Akismet to reduce spam. Learn how your comment data is processed.